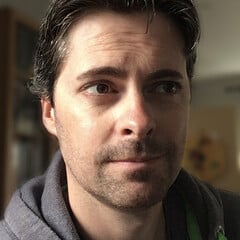 All my life I’ve had a strong passion for the creative arts, especially those centered around creating worlds or bringing ideas to life such as movies, video – games and comic books. To this day my passion remains and my prime motivation is still to produce high quality art with a like-minded team. I take pleasure in working alongside other artists and seeing them succeed. Mentoring and helping other artists develop is an aspect of my job I’ve enjoyed over the years.

I’m a well-rounded artist with a lot of proven experience in game art production and visual design and direction. Throughout my career and to this day I continue to push my skillset in both 2d and 3d art alongside staying apprised of new techniques and software emerging to continually improve my workflows. My strong technical knowledge related to game art compliments my knowledge of traditional art fundamentals. Continual personal development is something I believe in no matter how much I think I may know there’s always more to learn.

After being fortunate enough to work in the games industry since 2007 I now more than ever try to share any wisdom I’ve gained thus far with aspiring artists who wish to enter the industry today. This has led me down the path of going back to producing tutorials to share online and getting involved with the Grads in Games – Search for a Star event as an assessor and Judge in 2019 and 2020.